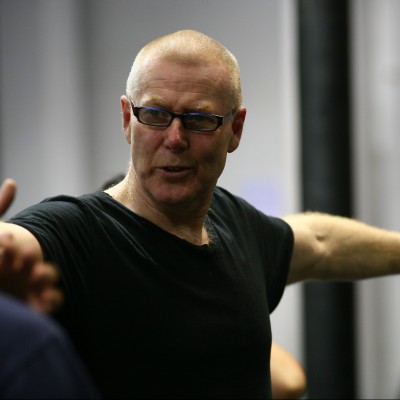 Robert Draffin, a trained Secondary school physical education teacher and professional footballer found his way into Community Theatre and has since a created body of artistic work spanning 45 years. He has directed 74 theatre productions nationally and internationally, has taught acting and designed tertiary acting and theatre courses, currently teaches part time at Faculty of Fine Arts and Music, Victorian College of Arts University of Melbourne is co- artistic director of Liminal Theatre and designs and implements experiential corporate training programs.  His work is defined by the corporeal and kinaesthetic state of liminality: the embodied creative energy held in thresholds and moments of flux.  He has just completed his Higher Doctorate retrospectively researching his artistic practice.

A recipient in 2010 of the prestigious Victorian Arts Centre Kenneth Myer Medallion (Outstanding services for the Performing Arts) he has received the prestigious three-year Fellowship from The Australia Council of the Arts and an Asialink residency to research the interchange between traditional and contemporary Arts Practice in Asia. In 2000 Draffin received Melbourne University Teaching Excellence Award. In 2009 “Kisah Seribu Satu Malam” won Tempo Best Theatre Production in Indonesia. In 1994 was awarded The Age Best Independent Theatre Production for “Rigoletto: a perversion”.

Has taught acting at University of Melbourne , Monash University, Latrobe University, Deakin University In 1996 -2000 he was Lecturer In Acting at the School of Drama at the Victorian College of the Arts.  In 2001- 2003 he was a founding acting teacher at Theatre Training Research Program in Singapore. In 2006/7/9/10/11/12/13/14 taught acting sessionally at the Shanghai Theatre Academy. He is currently Lecturer in Theatre in the masters programs at University of Melbourne VCA-MCM. In 2009 wrote and designed Bachelor Degree Course in Performing Australian Institute of Music and 2012 Graduate Certificate in Cultural Engagement VCA-MCM.  In 2014 he co-designed Masters courses in Directing and Dramaturgy University of Melbourne VCA-MCM.